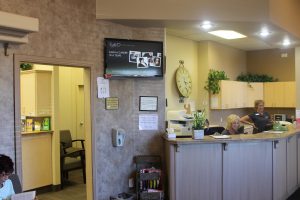 Smart marketers have found a better way to reach their local audience and engage them with category exclusive, high-definition advertising on ToMM TV.  We install ToMM TV Units in the most popular locations in town including Restaurants, Health Clubs, Salons/Spas, Medical/Dental Clinics, Community Centers, and Auto Repair Centers, etc. Based on your goals and budget, you will select which ToMM TV locations you want to advertise in (base on availability).  Your ToMM TV rep can help you determine which locations will best reach your target demographic. Once you have selected your screen locations ToMM TV will create an eye-catching, HD commercial to run on the screens.

Our society has reached a digital age.  We receive our information and entertainment in a much different way than we used to.  Rather than opening a phone book to find a number, we go to the internet right on our smart phones.  Rather than listening to traditional radio, we plug in our iPods or MP3 players, or connect to satelite or internet radio.  Gone are the days when we were dependent on the printed newspaper or the local news channel to find out what is going on in the world.  All of these changes have made it very difficult for companies to determine which form of advertising will be the most effective.  Traditional forms of advertising that used to work, have become much less effective.  Those who have found digital signage have found a more effective solution to reaching their local target market.  Digital signage reaches people when they are out of their homes and in a captive and spending environment.

Digital-Out-Of-Home Advertising Revenues are estimated to reach $3.7B in 2013, representing an
astronomical annual growth rate of 13.5 percent (BIA/Kelsey). In an April 28, 2008 DOOH forum
sponsored by the Wall Street Journal, media executives named DOOH as the “hottest medium” today;
spreading even faster than the internet in its early days because of its ability to reach consumers when
they are away from home and in buying mode.

According to Arbitron, “More than 70% of the U.S. population, or 181 million people, have viewed a
digital video display out of home in the past month, while 52% of the population, or 135 million, have
viewed a digital video display in the past week. Digital video in public venues reaches more Americans
each month (70%) than video over the internet (43%) or Facebook (41%).”
Arbitron Digital Place-Based Video Study – May 2010.